The Classic Car Club proudly announced the new arrival of a new baby a few weeks ago: a 45 year old Porsche 911SC. With track car history, the original slim bumpers and no spoilers to spoil the lines, it looked very enticing indeed. So I got into the queue to try it out.

My previous 911 experience was with a modern water-cooled 996 Targa. I liked it but it felt a little flabby and ordinary. This 911 was the original unfiltered Capstan full strength – and probably just as lethal.

Before collecting it, I fell to wondering why the 911 has lived so long. And why it wasn’t simply strangled at birth. If you want to be really cruel you can claim the original 356, and the 911 that followed it, are VW Beetles with pretty coupe bodies and better engines. They have the same design parentage and have driven down the same disastrous design cul-de-sac.

There’s a reason why virtually no-one else makes rear engine cars. They are not a good idea. Even the faintest grasp of physics tells us that hanging a heavy weight out the back of a car turns it into an enormous pendulum. Go round a corner too fast and the pendulum weight will take you off the road and into the bushes. And even Porsche acknowledges this by building no other cars with a rear engine. In the front, yes, in the middle yes, but not out the back. And as well as creating a pendulum, rear engines make a proper hatchback impossible and keeping luggage in the front is always compromised by steering racks and the need for crumple zones.

So why has the 911 lived over 50 years and looks set to last to the end of ‘car time’? Well, it’s the same reason for the Beetle’s longevity. It may be a terrible design, but it’s very well made, very reliable and full to the brim of character. So while there have been plenty of better sports cars in so many ways, none of them have been as viable as every day transport or as much all round fun until it throws you into the bushes.

So I take a closer look at this early 911 to see if it really is as special as the fans will cry. It sports no labour savings electrics other than a sunroof. And that sounded more like a portcullis opening.

The classic oval dash was dominated by the rev counter and a speedo set at a crazy angle so you could read the relevant speeds through the small steering wheel.

With no choke, starting it was slightly worrying, but putting the throttle to the floor brought it to life first time – virtually every time.

At low revs the 911 sounds like a large hoover. But instant response to the throttle brings a fabulous and addictive roar. The engine is pretty by Porsche 911 standards and you can see it without prizing off the horrible sheaths of black plastic normal in a modern car.

My passengers could not ignore the snarling intensity of this little machine. It was beginning to grow on me. My carphobic wife, Luisa, felt it was a completely different experience to travelling in a modern car. Mind you, she didn’t have to wrestle with the racing gearbox. As you can see from the picture, it looks more like The Terminator’s arm and is equally tough on anyone who tries to grab it… 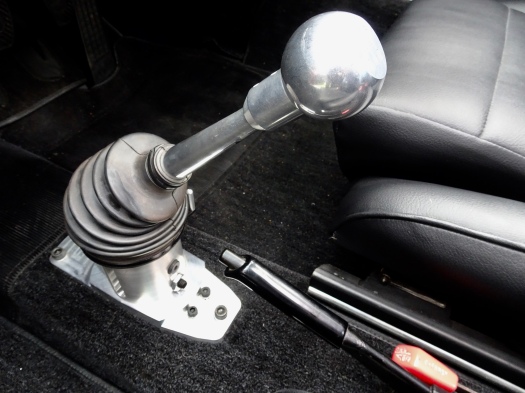 This 911 appeared to have been brought up in warm and dry Australia, which accounted for it’s genuinely rust free condition. But even the interior looked largely unworn apart from the general patina of age. The door cards were incredibly basic. One strap to pull the door shut, while a small tug on the other one made it spring open.

The slim pillars and large glass area also made visibility excellent. You feel yourself extending to the extremes of the car, knowing exactly where it is on the road. The steering is unassisted but with next to no weight over the front wheels – and skinnier tyres, it is light and very responsive.

That engine weight which I was moaning about also benefits when you pull away. You don’t lose traction with this much weight over the driven wheels…. I’m no fan of the famed Fuchs alloy wheels – they’ve always looked like a 1970 cheap rostyle hubcap to me. Remember those were the days when no-one could afford proper alloys. Now you get them on caravans…

The more I drive this old 911, the more I prefer it to the later model.

It is pure, simple and so… small. The picture shows the car next to my daughter, Kat, and while she is normal sized, doesn’t the car look dinky? ‘My’ 911 is 63 inches wide and 163 inches long. The monstrous width of a modern 911 makes it over a foot longer and, more tellingly, over a foot wider too! I wouldn’t mind if this meant more room for the passengers but the car remains very much a 2 seater with tiny shelves for elves in the back. Yes, I know it’s safer and quieter, but you can’t beat small and light if you also want agile and nimble.

This lovely old car is 35 years older than the modern 911 I tried. If you want to buy one it is worth at least three times the modern car – and it always will be.

Next stop: a Routemaster London bus! A 60th birthday present from old friends who are obviously trying to tell me something.

And talking about new babies as I did that at start of this article, my son Jamie and his lovely wife Laura have also made me a Grandad.