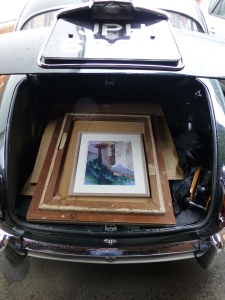 So, Benny the Bank, may I offer you this lovely 1965 3.8 litre in British Racing Green and chrome wire wheels? At the time a snip for a couple of thou and yours now for about 10 times that figure.

Well I wasn’t robbing banks, but I did need to get some oil paintings out of town quickly. So I picked it up on Friday for a getaway run up to Norfolk. The boot swallowed the swag with no trouble at all.

Unlike some of the other cars I’ve tried, this felt very easy to drive and potentially useful on a daily basis. It started well with the aid of an electric choke – a modern addition. The gearbox was very easy going. The badge on the rear bumper warns the driver behind to keep back – because this is one of the first cars with four wheel disc brakes. And they do work.

So all is going well. Well nearly. The power steering was very light at first, but as I got out onto the M11, it began to change character. The wheel seemed to stick in whatever position I left it in and then moved very jerkily. This didn’t cause as many problems as it should, because there was so much play in the steering that nothing much actually happened in terms of a change of direction. But as the weekend wore on, most of the fluid drained onto the drive below the car. This made the car harder to manoeuvre at low speeds – but once you were on the move it was fine. Real men don’t need power steering…

Sitting at the no longer power assisted wheel,  the cream leather and walnut reminded me that Jags are all about creating the gentleman’s club – for gents who aren’t quite gentlemen. The row of dials across the centre of the dash would not have looked out of place in a Lancaster bomber. The labels below them said ‘Cigar’, ‘Start’ and ‘Map light. The period LW/MW radio had very little to say for itself. But the music of the engine was enough to keep me company.

The view inside the car was very charming. But the view out was also very attractive. The leaping cat ornament at the front of the bonnet was evocative. I think it did more to impale pedestrians than improve performance. Needless to say, manufacturers can’t put a weapon

like this on the front of cars anymore. Owners do though.

This Mk 2 had the same engine as the E Type I borrowed recently, but – with one fewer carburettors – it could not boast the same (claimed) 150mph top speed. For all that it was certainly lively and quick – losing nothing in the cut and thrust of modern traffic. Fuel consumption was suitably terrible – it seemed to get through a gallon just starting up. The garage door was covered in oily soot in seconds.

Both Mum and Luisa liked this lovely 50-year old.  As we get older, the appeal of a saloon car – roomy and easy to get in and out of – does grow. Apart from the steering problems, there was every reason to fall in love with a car like this as an everyday proposition. 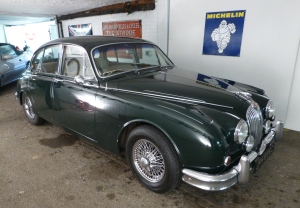 So, Benny the Bank, what do you think? Well of course, you robbers had to contend with the fact that the cops also liked the Mk2. So the game was evened up back in the 1960s and the scene was set for many a car chase.

And the police carried on loving it. ‘Morse’ fans may recognise that this was the car driven by the man himself. But his was only a 2.4 litre, so with your 3.8 there’ll be no contest. Go on Benny, you know it makes sense.