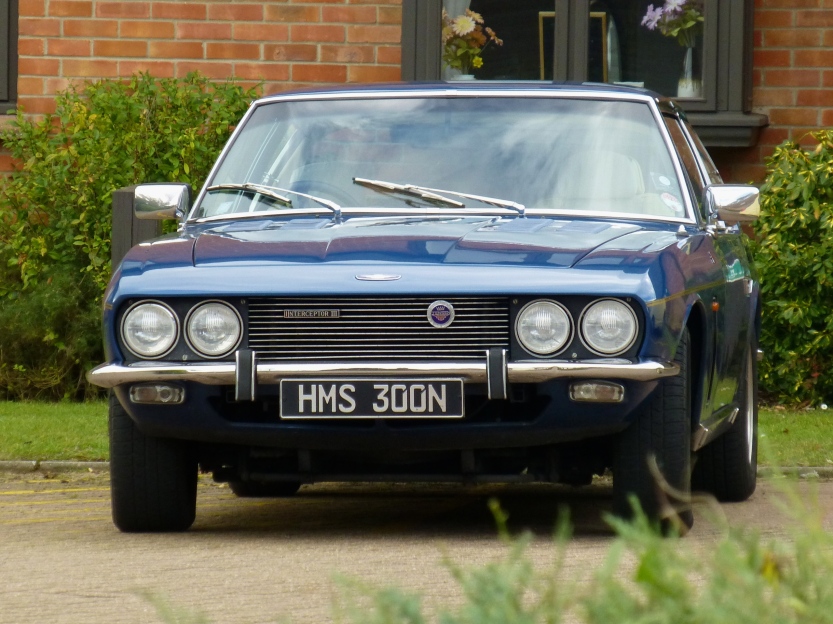 Do you remember those Sundays, decades ago, when families would just ‘go out for a drive’?
When we did, my Dad and I used to keep our eyes peeled for our favourite prestige cars. I hoped that maybe, if our premium bonds came up, one could replace the family Triumph Herald.
This plan wasn’t so clever though as both Dad and I liked sporty cars. How could a rakish two seater actually replace a family car and provide room for all of us? But there was one particular large four seater coupe, which we both loved, that might have done the trick. Sadly, the premium bonds never came up and we never found out.
Well, 40 odd years later, I’ve finally had the chance to drive this very car. 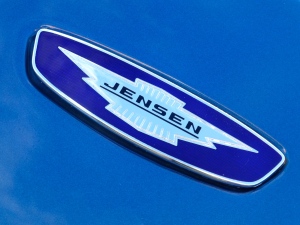 The Jensen Interceptor.  A magnificent name – for a magnificent looking machine. I hesitate to call it a sports car, or even a car. Climb aboard and you feel llike you’re in charge of a train – or even a ship. No surprise the registration plate on this one begins ‘HMS’.
The styling is Italian, and opening the bonnet reveals a big 6 litre American V8 engine. But it was built just a few miles from where we lived in Birmingham, in the far from exotic land of West Bromwich.
Like so many hand built low volume cars, it is easy to find yourself playing ‘spot the parts’ . In other words, identifying which British Leyland car provided the ash trays, door handles, etc. And then you can play ‘spot which one is going to fall off next’… Nevertheless the cream hide and lambswool interior is rather spectacular, even if there is no real leg room for the rear passengers. While all rather tired now, in its day it was a luxurious contrast to the spartan vinyl of Dad’s Triumph.

The long row of dials across the dash is reminiscent of the cockpit of a jet and includes rarely seen items like ‘volts’. None of them are very accurate though and barely visible at night.
I seem to remember that the cigarette maker Rothmans used to use a shot of a Jensen interior in their ads. It featured the braided jacket cuff of an airline pilot, nonchalantly smoking at the wheel. If there had been a cup holder, it would have probably held his tumbler of scotch. The perfect pick me up before a long haul flight to New York?

The bonnet is the length of an aircraft carrier. All this makes for a very long car which rides well and goes very nicely in a straight line. Despite the beautiful shiny steel of the Mota Lita steering wheel, I found it was much less keen on going around corners. Underneath the lovely body, the chassis is very basic, featuring the same style of leaf springs and solid axle that you would find on a stage coach in the 19th century.
Electronics and air conditioning have also come a long way in the last 40 years. Much fiddling with the controls seemed to have no effect on getting the right mix of cold, heat and air into the cabin. But the rear side windows opened in exactly the same way as those of another former family car, the Ford Anglia, and they did the job of keeping air flowing through.
Another big improvement that cars have made in recent times is fuel economy. The enormous engine guzzled fuel at the rate of a gallon every 11 miles. At one stage I was driving from filling station to filling station. 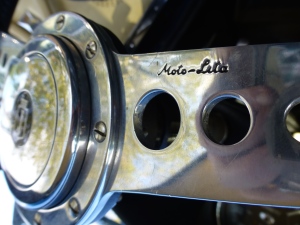 Having the Jensen for the weekend was pleasantly underwhelming, ie it didn’t break down. Starting it was the only worrying moment. If it was cold, it needed a couple of prods on the accelerator to prime the huge carburettor, But do the same thing when the car was warm and you would flood it – leaving it undriveable until the fuel had evaporated. The lazy automatic gearbox suited the car perfectly and the disc brakes slowed this ship down very rapidly – unlike the similar period Mustang I tried.
But driving it back to London in the heavy rain and in the dark was miserable. The wipers were feeble and the windows kept misting up. I was very glad to pull into the club garage and hand back the keys.
I know of another Dad who loved the Jensen. And while he couldn’t afford the purchase price either, he could at least name his son after one…
….And that lad grew up to be Formula 1 world champion Jenson Button. His premium bonds have definitely come up – I think he could afford to fulfil his Dad’s dream today. But like me, he would probably feel that this car is best remaining just that. As they say, don’t meet your heroes because if you do, you’ll no longer have any.
Next stop? A Jaguar E Type. I somehow feel this particular hero will deliver.
October 2014