Classic doesn’t just mean old, it also means timeless. Some cars don’t achieve classic status even if they are old; some are instant classics.

For most of their history, Porsche have produced a car that falls into that category: the immortal 911. They actually thought of killing it off around the time of the 928, back in the late 70’s, but it’s still here and stronger than ever. The 911 has been voted the most significant sports car of the 20th century.

As a car enthusiast, it is embarrassing to admit I had never properly driven one. I decided to put that right recently. The Classic Car Club has several Porsches and I borrowed a 2002 911 Targa for the weekend. You have to appreciate that ‘911’ is not really a number; it is a name. So the cognoscenti know this as the 996 model. Confused? That’s normal with the bewildering array of 911 models Porsche make.

One good way appreciate an object is by comparing it with something from a different category. So if the 911 had to be a wristwatch, it would have to be a Rolex Oyster. This is a timeless classic of timekeeping, instantly recognisable and beautifully simple. The Rolex is also brilliantly built, but rather trapped by its history – like the Porsche. The 911 still boasts (that can’t be the right word) an engine behind the rear wheels. This was a forgivable mistake in the 1930s, when Ferdinand Porsche himself designed the 911’s original ancestor, the VW Beetle. But you’d never do it today.

That strange layout has not changed. But no amount of development and electronics can make up for the laws of physics. Sticking with this flawed format has meant the 911 still looks very much like it did on its launch back in 1963, just like a Rolex Oyster does. For sports cars, the perfect layout is mid-engined, as pioneered by the Lamborghini Miura by the 1960s. That way the weight of the engine is in the centre of the chassis, just like an F1 car. Porsche know this too and their smaller, Boxster, is mid-engined.

So one Friday night found me trundling up to the Classic Car Club on my Brompton. This is another unchanging design classic, if not one that has the owner quite so envied. I normally keep my bike with me, as an insurance policy should the car break down. This was hardly likely with a 21st century Porsche, and the question was: would my bike fit? The front boot was a non-starter so I dropped the rear ‘seats’. But feeding it into the back through the doors looked very tricky. And this was when the Targa version came into its own. The large rear window is also a tailgate, giving easy access to a reasonable load area. Not the easiest of operations, given the engine is in the way, but I managed it.

The bike is in, so now it’s my turn. The 911 is not an intimidating car to sit in. It is small, light and airy. There are no real blind spots and you don’t feel vulnerable in traffic. The bonnet drops away but the wings provide a slightly vintage pair of sighting points. They are fronted by the classic headlamps. Except that they’re not, as this generation of 911 has the fried egg lamp moulding that was universally hated by owners. It made the front of the 911 look just like it’s cheap kid brother, the Boxster. The two cars were developed in tandem and 911 owners felt rather short changed. Newer models have reverted to the single headlamp style of the original models.

The controls are conventional and feel very robust and no nonsense. This is a German car. The row of dials, contained within the view through the steering wheel, are all clear and useful. The basic design has not changed in decades, but the dials overlap these days. This means they take up less space and have a distinctive 3D quality.

One thing that has changed is the engine note. Start up a 911 and it used to sound as though someone was sat in the back vacuuming the rear carpets. The huge air-cooling fan hardly growled ‘supercar’ but it was endearingly unique. Modern 911s are still of flat 6 configuration but water-cooled. So while the rhythm is there, the sound is more that of a conventional car engine. But apply a few revs and it produces a compelling roar.

Having the engine hang so heavy over the rear wheels ensures excellent getaway. It squats down and it goes. It also means the steering is naturally lighter and very responsive. As I mentioned, the electronics have stopped the engine acting like deadweight ready to swing you backwards through a hedge if you corner too quickly.

This model has the excellent Tiptronic automatic transmission. I have to admit that I almost never paddle with paddle shifts, recognising that the car is more capable of making decisions about gears than I am. But this approach makes even more sense with this early version, as the paddles are fiddly switches on the front of the steering wheel.

Although this car is 15 years old, the body and interior barely shows the traces of those years. Again, nothing is quite as classic as quality. A few years ago I treated myself to a Rolex Oyster that was born the same year as me. It’ll be 60 years old this year, but unlike me, you’d never guess. 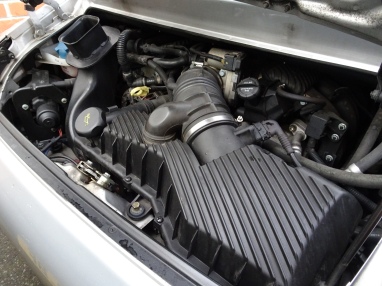 Not that this 911 is perfect. The indicators don’t work properly and the radio is constantly crying out for a visit to the doctor. But the car starts instantly and never shudders or groans over London’s potholes.

Out on the open road to East Anglia, this is a very easy car to in which to get comfortable. Not that the ride is soft, but it just communicates a message that makes you feel confident and secure.

My wife Luisa is definitely not a car enthusiast – despite my best efforts. But she gives the Porsche a cautious thumbs up. She like the design simplicity and lack of obvious flash. I don’t think she’d approve of a heavily spoilered (i.e. spoilt) GT3.

As the 911 is such a recognisable car, everyone has an opinion about the people who drive them. Back in the ’80s the 911 was the city wideboy weapon of choice. Some of that unpleasant imagery still lingers. Let’s be honest, you’re not loved if you drive a 911. Unlike other classics I’ve borrowed from the club, no-one is going to give you a grin and a thumbs up. They might even acknowledge you with a different digit.

As always, handing cars back to Alfie at the club on Monday morning is a bittersweet moment. I had really grown to like the 911, but it’s a huge relief to park it unmarked and undamaged. The club insurance excess is in the £000s. It’s a clever trick that helps the club keep membership fees down – and driving standards up.

But the 911 stuck in my mind and I could not resist researching the classifieds to see what buying a similar car would cost. With prices below £20k it’s tempting, but I don’t have that sort of money for what is effectively a two-seater toy. More importantly, I would struggle with the heavy servicing and insurance costs. I’m reliably informed you should assume £1000 per visit to a dealer. And you don’t skimp on services with a car like this.

But it did get me thinking about another sports coupe I could afford.. It has strong and surprising similarities to the 911. This low slung coupe is also rear engined, drives through  the rear wheels, has a Targa top, paddle shift and even a turbocharger. And you are guaranteed high quality as it’s made by Porsche rival, Mercedes Benz. Like many classics, it’s not made anymore, but you could get a decent one for under £2,000. Oh and it does 60mpg.

called a Smart Roadster. But before you start laughing I will admit that I used to have one and it was a hoot. With the Smart, I always felt as though I was flying, but the tiny 700cc engine meant I never picked up a single speeding ticket.

While we are on the subject of cheap substitutes… if you can’t afford a Rolex either, take heart, because there is another iconic Swiss timepiece within everyone’s reach. It’s called a Swatch and is as recognisable as a Rolex. Yet it is more accurate,
and is even cheaper than chips.

If you have either, or even both, of these economical design classics, no-one’s going to hate you. Just like when you arrive on a Brompton, they’ll probably think you’re quite sweet and want to look after you instead.